» In a few words, what is the idea? We tell you what Ramakien is, the meaning and why it is so important in Thai culture and for Thai thinking, even nowadays.

» For whom? Travellers who like to dive into the culture of the country they visit.

» When? It is likely that during the trip the Ramakien comes up (Muay Thai, dances, historic places, celebrations, etc). Then it’s the right time to read this post.

Those visitors interested in learning more about the cultural universe of the Thais, have an excellent opportunity to do so through the story of Prince Phra Ram, a legend narrated in the Ramakien, the most important work of Thai classical literature.

The text is an adaptation of the Indian Ramayana, an epic poem that dates to before the Christian era and is comparable to Homer’s Iliad. It is still very popular in India and the recitation is considered an act of great merit. The main character, Prince Rama, is considered to be an avatar of the Supreme Protector, Vishnu.

The Ramakien Epic tells the story of Prince Phra Ram in his fight to rescue his legitimate wife, Naang Sida, captured in the forest by the demon king Tosakan.

Before this, the prince had lost his place as first in the line of succession due to Palace intrigues and had also been forced into exile for 14 years.

The power of the Ramakien is more easily understood if we bear in mind that human beings like to think of ourselves via stories that enable us to position ourselves in the world and form our society. And, furthermore, we use these narrations to inspire many of our personal beliefs and customs.

Great mythical stories form a fundamental part of the sacred history of many different peoples.

On the way to Lanka, where Naang Sida is held captive, the qualities and temperaments of the different characters are put to the test, in their battles against Tosakan’s supporters. Prince Phra Ram himself will have numerous opportunities to show that he possesses the virtues of an ideal king, such as justice, loyalty and compassion.

The different episodes feature humans and mythological creatures, such as Hanuman, General of an army of monkeys and the loyal, courageous ally of Phra Ram, who plays a significant role in the Thai version.

Let’s see a couple of examples.

Example one, looking for the princess

In the next image Hanuman (with a white mask) appears behind of Tosakan’s brother Piphek, who is sleeping next to his wife Naang Treechada (left chamber) and there is also another demon named Kumphakan and his wife (right-hand chamber).

In the Ramakien each image is part of the narration, and the characters often appear more than once in the same scene, as is the case here with Hanuman.

Well, the scene takes place at the Tosakan Palace in Lanka while everyone is asleep. Hanuman entered using magic in search of Naang Sida.

The tension of the moment is high because in the event that one of those women lying with the demons were Naang Sida, it would be terrible news and would have fatal consequences by showing her infidelity, even if it was happening against her will.

The next scene shows Tosakan (the character with ten arms) listening to his younger brother Piphek.

Previously they were sleeping and Tosakan had a bad dream, so he asked Piphek for help to make intelligible its meaning. 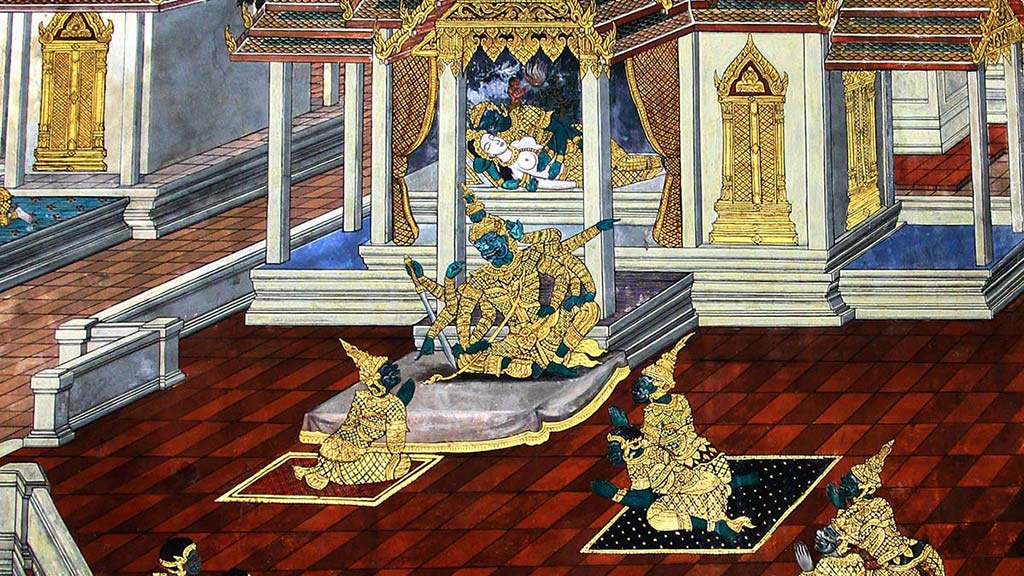 In the dream two vultures appear, one white and one black. The first one defeats the second.
Such a bad omen before the battle is the worst news; it’s indeed half defeat.

As Piphek can not conjure such bad luck, Tosakan goes into a rage and sends him into exile removing all his belongings. A very unfair response to someone who has only shown honesty and loyalty.

Walking to the banishment Piphek is arrested and brought in front of Phra Ram, who after listening carefully to what has happened and appreciating Piphek’s honesty, welcomes him into his army.

In the end, Piphek will rule the Kingdom of Lanka once Tosakan is defeated and dies. A new and fair king.
Throughout the story, the behaviours of each of the characters are relevant, but there is more.

It is likely that the leaning of the Thais to visit brahmins, mediums and seers to know when it is more favourable to undertake new projects, as well as carry out propitiatory ceremonies, is related to passages like this.

Sharing a dinner with a Thai family is an interesting and fun activity, which also offers the ideal atmosphere to talk about the Ramakien, Buddhism, the houses of the Spirits and anything else that interests you. You can do it with Wasana through Withlocals.
The price must be updated, it depends on the number of diners. 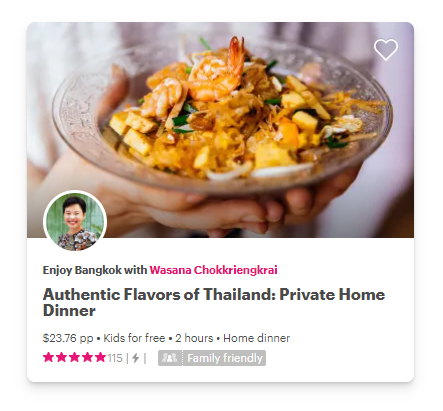 Please rate this post
 5/5
Summary
Article Name
The Ramakien, Inspiration for the Soul
Description
We tell you what Ramakien is, the meaning and why it is so important in Thai culture and the Thai people thinking, even nowadays.
Author
Manuel Francisco Jalón
Publisher Name
Manuel Francisco Jalón