» In a few words, what is the idea? Here we explain the meaning of the Buddha’s gestures that you will see in the temples of Thailand.

» For whom? For travellers wondering about different Buddha images as they express the central aspects of Buddhism.

» Where? On visits to a Buddhist temple.

On your trip to Thailand, you will come across a host of figures and images depicting the Buddha. The differences between them are to be found in the various positions and gestures, i.e. mudras, a Sanskrit word meaning sign or seal.

All religions have struggled to find the best way of conveying their beliefs and traditions to the faithful, whether that be, for example, through parables, epic tales or images loaded with symbolism. Such is the case of Buddhist mudras.

In fact, these are the building blocks of the universe of the sacred, the symbols that show us the things that really matter.

As explained by the monk, Shravasti Dhammika: ‘A statue of the Buddha with its hands rested gently in its lap and its compassionate smile reminds us to strive to develop peace and love within ourselves. The perfume of incense reminds us of the pervading influence of virtue, the lamp reminds us of the light of knowledge and the flowers, which soon fade and die, remind us of impermanence. When we bow we express our gratitude to the Buddha for what his teachings have given us. This is the meaning of Buddhist worship’.

Mudras are images of Buddha in which, although they involve the whole body, it is the hands that perform various symbolic gestures, pointing towards the core of the Dharma.

In other words, the various positions in which Buddha is depicted refer particularly to significant moments in his life and in his teachings. They highlight the things that his followers should pay special attention to and internalize.

They are also a way of forging a link with the Buddha that is being invoked, an essentially spiritual gesture that reveals inner wisdom.

There are over 50 postures or attitudes of Buddha, although some of them are depicted much more often than others, as is the case of the mudras of illumination, meditation, mercy, warding off evil and praying.
Here, in Thailand, the posture that is most often depicted is that known as “subduing Mara” (next picture).

When Siddhartha attained nirvana, the devil Mara, who had been tempting him up to the end, told him that even though he had achieved such a high spiritual state, no one was there to witness it.

Buddha’s reply was to point to the ground with the index finger on his right hand and stated that Mother Earth was witness to his achievement.

From the Buddhist symbolic perspective, Mara represents the temptation of ego, desire and hatred that strive to control our minds by displacing love and compassion.
The position of the left hand corresponds to the mudra of meditation.

At the Wat Yai Chai Mongkol in Ayutthaya, there are numerous statues of Buddha in that posture. 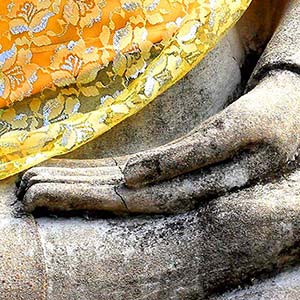