» In a few words, what is the idea? We explain how they are and the main elements. We don’t extend, just enough to know the essentials and their role in Thai society.

» For whom? For travellers curious about these sacred places, who travel leisurely.

» When? Before or during the visit.

In ancient times, Buddhist monasteries were located on the outskirts of towns, in the forests, where monks found shelter during the rainy season. Adverse weather forced them to leave the roads for a while.

Over time, other motives led to the founding of new monasteries, for example, to commemorate victories in battles, to celebrate the birth of a future king or the cremation of a remarkable person.

This evolution is fascinating because from then on monasteries were going to acquire a new function: to build a social identity, that is, in addition to spreading its philosophy, Buddhism became an identity trait for the community, which helped them feel part of a collective project and fostered group cohesion.

For these reasons today it is said that Thailand is a Buddhist country.

The design of the monasteries

The layout follows a pattern that creates an atmosphere of calm and protection, in contrast to the disorderly expansion of towns and cities.
At the bird’s eye view, as a deity would see, it draws a sacred diagram or mandala.

Inside two different parts can be watched, the area with the religious buildings and the zone dedicated to the community of monks that lives there.

As for the religious buildings, the main ones are three: the Stupa, the Ubosot or ordination hall (also called Bot) and the Vihan or assembly hall. 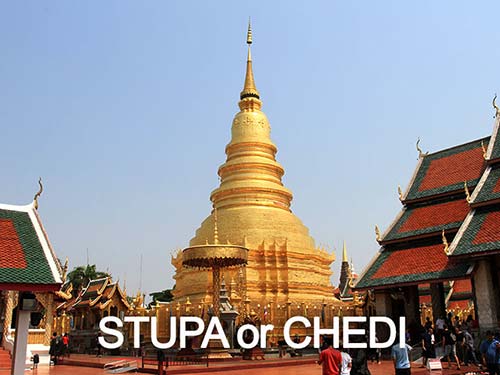 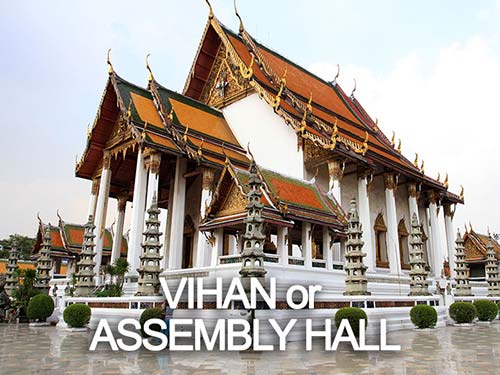 Let’s start with the stupa

When human beings have something that we consider especially valuable we express it giving it a privileged position and one way of doing this is through constructions that stand out in the surroundings, as it happened with funerary monuments.

In the course of time, what initially were a few stones, ended up being much more sophisticated structures like the pyramids of Egypt and the stupas in India.

In the same sense, some of its parts can be interpreted. The ornamental umbrella that crowns it has to do with its use among the Indians, functional to face the scorching rays of the sun but also as a sign of dignity and honour. In fact, the more tiers the umbrella has, the higher the social range of the owner.

Therefore, the stupas are monuments that remember and honour the Buddha and all that he represents. In Thailand, it is very common for the faithful to circle the stupa in a clockwise direction while praying. 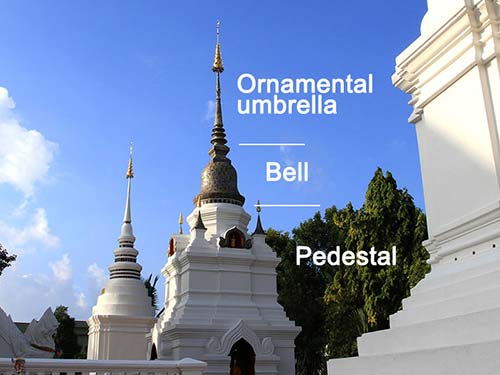 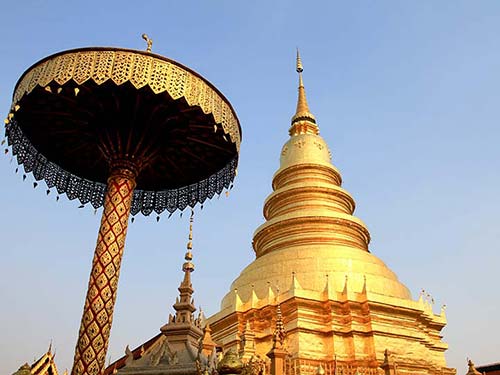 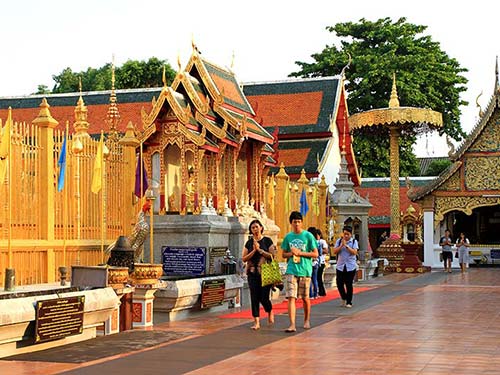 The three parts of a stupa

As Buddhism spread throughout the East, different local styles were incorporated in its construction as well as new names were adopted. In Southeast Asia it is also called chedi.

As for its parts, following the German architect Karl Dohring, traveller from the beginning of the twentieth century expert in this subject, from top to bottom, they are the aforementioned ornamental umbrella, the bell and the pedestal.

A fantastic curiosity about the stupas

The first time we heard it, we found it more a legend than something plausible, nevertheless, after having found new and reliable historical references, we have to say that this is amazing and full of clarity… if it truly happened like this.

In times before the consolidation of Sukhothai as a mighty kingdom, the power was distributed among several principalities. In that context, sieges were often carried out from some small towns to others.
And then the following happened, more than once.

In the year 1043 Lopburi was besieged when the situation became very delicate, close to capitulating, when the Lord of Lopburi came up with a deal to his enemies: Why not settle the dispute through a stupa building contest instead of a bloody fight? Much better, of course.

What is extraordinary is that his enemy accepted the challenge and both armies got to work to find out which was more skilled in this task. They should build a stupa of 15 wa (30 meters) of high by also 15 wa of width… Amazing!
Unfortunately, we could not know who won the match.

Nor did we find any explanation of how such a surprising proposal could succeed.
But taking into account that the construction of stupas is considered an act of great merit in itself, who were able to build the best one, perhaps gained more moral legitimacy in defending their aspirations. It’s just a guess.

The vihan or assembly hall

The vihan is the third most important place in a Buddhist monastery and inside are held those celebrations that gather monks and believers. There may be more than one in the complex or may lack it if the monastery is small.

Although the floor plan is generally rectangular, sometimes the base draws a soft curve, seeking certain parallelism with the boats.
After all, life is like a journey and the monastery offers the peace of feeling on a safe ship across the Samsara sea sailing to the Nirvana.

The monasteries in Thailand are one axis of the social life

In addition to a spiritual centre and a trait of a collective identity, Buddhist temples are one of the central axes of social life.
People are involved in the daily life of the temples.

Often come not only to hold religious events but also to use them as a school, shelter, establishing a temporary local market or as a place to locate a fair during local festivities, among other things.

At the same time, the lay community is in charge of financing and renovating the monastery.

William J. Klausner, academic of Yale University and advisor to the Ministry of the Interior of Thailand for a while, described everyday life as follows:

“The wat was clearly the socio-cultural, if not the geographical, center of the village. Villagers walked through the Wat grounds throughout the day; many fetching water at one of the cleanest of the village wells; others presenting food to the bhikkhus* at their mid-day meal; a few elders listening to the late afternoon daily sermon; some seeking guidance and advice from the Abbot on personal problems.
The entertainments, associated with the seemingly endless series of polling booths, were staged in the Wat grounds: shadow plays, maw lam movies. […] The wat was also the site for polling booths for the election of candidates to the national Parliament”.

*Bhikkhus is a Buddhist monk who has received full ordination.

The Ubosot or ordination hall, the heart of the monastery

There is only one ubosot in each monastery, and here the principal ceremonies of the monks take place, so it must have a minimum room for 25 monks.
Generally, laymen are not allowed to access this place.

Its design is similar to the vihan, although it can be easily identified because the building is surrounded by a kind of cairns called Bai Sema, whose function is to delimit a sacred space. 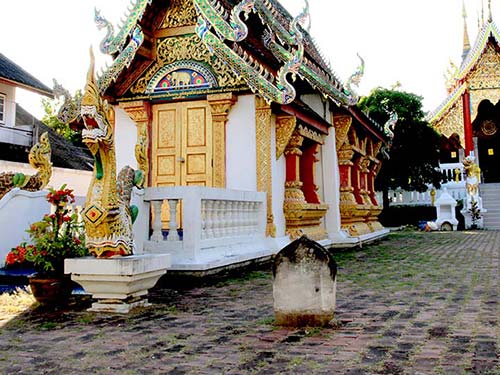 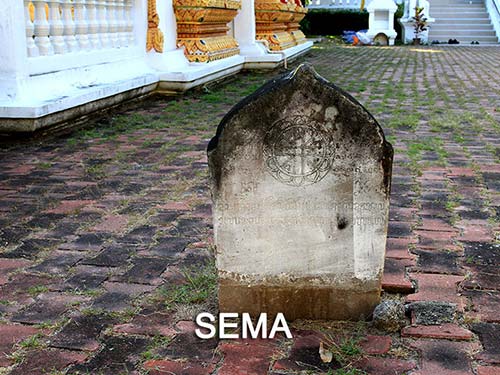 A statue of Buddha presides over the hall and in front of it is placed the altar with offerings of lotus flower buds and incense.

The gates are usually situated at both ends and the windows are not too large, with size enough to enjoy the sunlight but keeping a favourable atmosphere for meditation, and in an odd number, the favourite of Thai people.

The interior walls, in the ubosot and also in the vihan, display mural paintings with Siddharta‘s representations in past lives as well as the core teachings of Buddhism.

Prangs and stupas, what makes them different?

Some people think that the stupas and prangs are the same, that they simply change the style. Consequently, a prang would be a stupa with Khmer style. It is not correct.

They have in common that both are religious buildings, what means that they are related to the transcendent dimension of the human being and also that both come from India, in the case of prangs through Cambodia in Sukhothai times.

But while the stupa is a funerary monument, the prang was designed as the abode of the Gods, a place away from humans and towering to connect with heaven. You can see them in Angkor Wat, where the set depicts the sacred Mount Meru.
Over time, the uses changed and later the prangs were dedicated to honouring Buddha, as it happens today in Thailand. 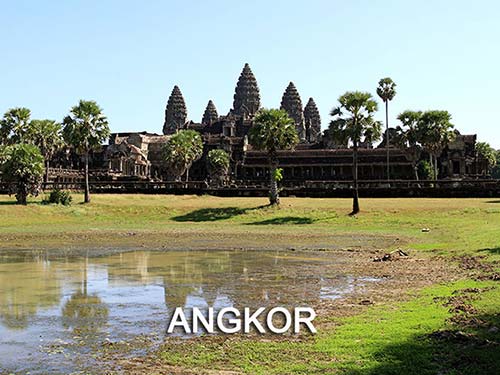 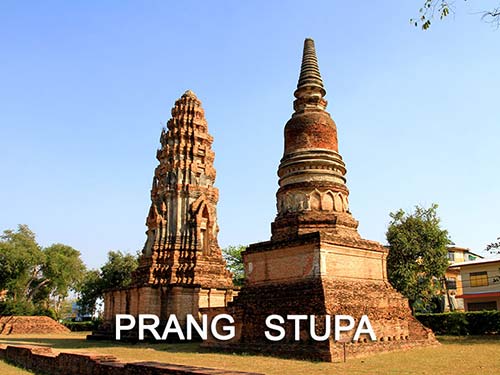 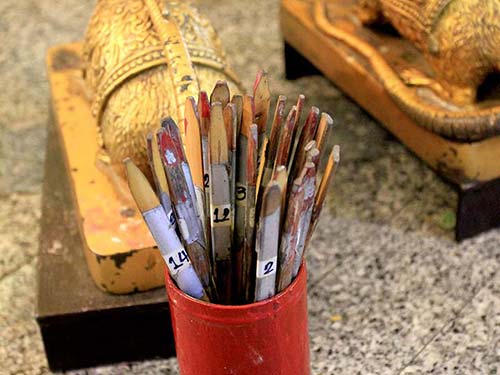 Wooden sticks are available at many temples to make predictions.
More about the Ancient Chinese Prophecy on the Enjoy Thailand website, if you are interested click on this link. We will open the post in a new tab.

Please rate this post
 5/5
Summary
Article Name
To Better Understand Temples
Description
We explain how they are and the main elements. We don't extend, just enough to know the essentials and their role in Thai society.
Author
Manuel Francisco Jalón
Publisher Name
Manuel Francisco Jalón