» In a few words, what is the idea? We explain in a simple and enjoyable way the meaning of dance movements and different types, to make your experience more interesting.

» For whom? Travellers who are going to attend a dance show.

In Eastern cultures artistic performances traditionally have a symbolic and religious purpose, reflecting the transcendental dimension of the human being. In this sense, dance is no different.

Classical Thai dance basically takes after the Indian tradition. A culture in which, from the very start the gestures made with arms and hands had a deep symbolic value. The goddess Shakti was responsible for the creation of life and the Cosmos with her dancing.
Shakti is the feminine dimension of Shiva, sometimes personified as his wife. Feminine, powerful and active, she lies behind creative activities.

You have to think that Hinduism is a very visual and sensuous religion, it believes that the sacred is always present and that the best way to experience it is through the senses.

So art has to play its role, it must show that divine reality through beauty and perfection so that the spectators feel the sacred presence within our world.

Nowadays, dancing is part of life like any other discipline in which the body is exercised in search of balance and harmony – one way of updating old traditions to modern times.

Schools often stage performances during the festive season, so if you have the chance, try not to miss them.

Some traditional Thai dances form part of rituals which seek the protection of the highest spirits concerning everyday matters.

Gestures were believed to be capable of magic, like spells or secret potions, and therefore of affecting the course of events.

They have to be performed strictly according to the canons, as it is precisely these gestures that guarantee the effectiveness and authenticity of the rites. Wow, it is like pronouncing the exact magic words in a spell so as not to cause a disaster.

Look at the hands of this representation of Trimurti, the divine Hindu trinity, smooth and accurate gestures (below, small central photo).

In Thailand, there are two main styles of dance, the classical: Khon, Lakhon and Fawn Thai, and the more popular: Ram muay, Waikhru, drums of war and regional dances, the latter associated with social activities in rural areas, such as the planting season or the courting.

The Kot Monthian Ban law issued by the Siamese Court in the late fifteenth century decreed that only the King could have a troupe of female dancers.
Conversely, in 1861, the Edict Royal Dance-Drama edict was passed by order of King Rama IV, wherein gender restriction was abolished, and women were encouraged to cultivate this form of art.

The Khon dance is considered the highest form of art and dates back to the Ayutthaya era. Through gestures and movement, the performance tells the story of the national epic drama called Ramakien.

With the aid of several narrators, the meaning of the various scenes is explained in advance.

The characters representing humans, monkeys, demons and deities appear wearing masks, but not the heroes Phra Ram and Phra Lak.

The prince Phra Ram and his army are fighting against the demon Tosakan, who has kidnapped his wife Naang Sida.
In the scene played, the prince’s faithful brother Phra Lak is going to be wounded during the confrontation with the demon Khumpakan, who uses a sacred spear.

The triumph in the battle smiles at them, but the life of Phra Lak is in serious danger.
The only way out is to collect herbs from Mount Saphaya and sacred water, a magical antidote that must be applied before the sun comes up again. 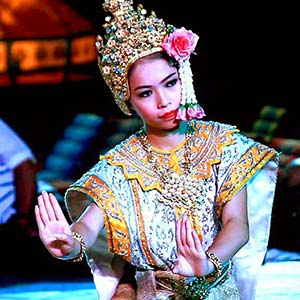